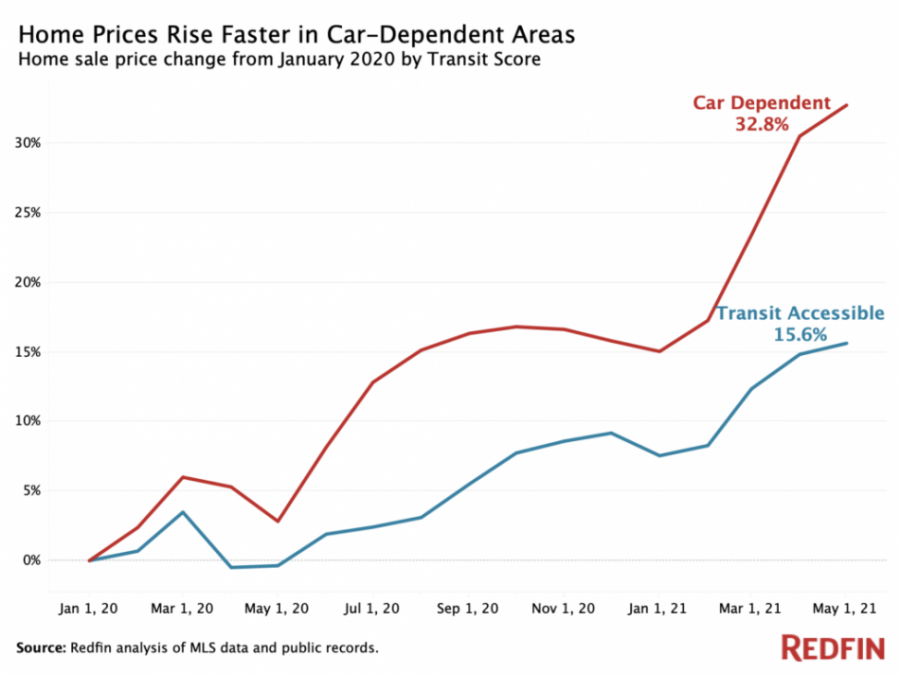 Proximity to work and/or public transportation used to be two top reasons for home selection. But after a year where many worked from home, how did those standard factors affect home prices?

According to Redfin, home prices in historically car-dependent neighborhoods (like suburban and rural areas) rose twice as fast during the pandemic when compared to public-transit friendly markets (such as proper cities).

“Remote work has allowed many homebuyers to leave cities for far-flung suburbs. Those suburbs often lack public transit, so new residents drive more often,” said Redfin Chief Economist Daryl Fairweather. “Hopefully, a less frequent commute will mean fewer hours behind the wheel. But as offices reopen, we may see commuters who used to live in the city and use public transit spending more time driving and emitting more carbon. Governments need to plan for this new reality and start providing more green transit to areas outside of major cities.”

Triple Your Donation to Protect the Central Coast from Climate Chaos! For a limited time, triple your gift to the Community Environmental Council (CEC)! Than...

Faces of our Community: Yokwe Ceramics

Yokwe Ceramics are handmade, Japanese and Scandinavian-inspired pieces that incorporate natural forms and earth tones. Handmade with love in Santa Barbara, a p...

Faces of our Community   Meet Dr. Aegean Chan and Dr. Mark Burnett, California Dermatology Group   Q: How long have you been practicing medicine?&nbs...

Faces of our Community: Cassie's Cardinals

Life in Santa Barbara is never dull, with activities available from culture to sports. Whether you’re looking to fill a morning or a whole day, whether y...

Hope Ranch Homes for Sale are within a private community in Santa Barbara, California. The neighborhood often flies under the radar of the international c...